Old Bridge of Forth, Stirling

The Old Bridge of Forth in Stirling, Scotland is integral to Scottish history. In this 19th century photograph of the bridge, we see its four stone arches and three piers. In the left corner a small boat rests upon the shore. The structure’s reflection is mirrored in the River Forth. The Stirling Bridge was built in the late 1400’s or early 1500’s, and was an inherent for transportation in the area. Before the overpass was built, a series of wooden bridges stood in this place. Multiple important Scottish events in history have taken place near or on the structure. One of the most famous was the Battle of the Stirling Bridge in the 1290’s. Sir William Wallace and Sire Andrew Moray of Scotland defeated Edward I of England’s army 1297. This was a huge victory for Scotland and remains integral to their history today. Since this historical battle, the bridge has been rebuilt multiple times, and today lies 80 meters from where it was in 1290. It was a main structure for transportation until the early 1800’s.

Scotland played an important role in the creation of photography. In the early 1800’s Scottish scientists David Brewster and James Clerk Maxwell were integral assets to the developments of photography. Brewster studied optics and later invented the kaleidoscope. Some of the first uses of photography tarted in Scotland. Old Bridge of Forth in Stirling has changed through the centuries, and has played important roles through history in Stirling. In the 19th century the bridge had decreased in use.. Someone took the time to take this photo of a bridge and develop it a process that was not easy at this time. Why do we have this photograph today? Perhaps it was taken to freeze an important time in Scottish history. 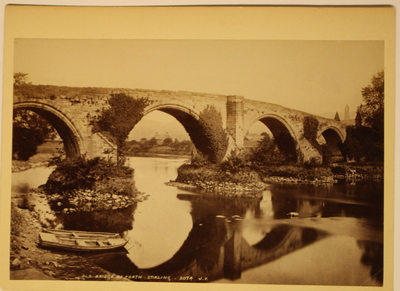