Originally produced in the late 1820s, Katsushika Hokusai’s Grasshopper and Iris reveals the continual aesthetic and artistic relevance of the woodblocking process, and way in which this method captures the earthiness of natural subjects.

Used initially as a way to reproduce written texts, woodblocking was first used in Japan in the eighth century to disseminate texts to a wider audience. While making the circulation of texts more efficient, the production process was long, as any colors other than black were painted in by hand. However, in 1765, the technique evolved; new technology allowed for the production of multicolored, single-sheet prints. As this discovery was made during the Edo period (1615-1868), the political situation at the time further emphasized this new technology as important to contemporary Japanese culture. As a result of Japan’s official prohibition of foreigners in the late 1630s, much contact with the outside world was cut off, resulting in the revival and reexamination of past traditions. By the beginning of the 18th century, Japanese artists and artisans were largely inspired by the country’s previous artistic and literary styles.

Katsushika Hokusai was one of the many such artists influenced by Japanese custom of wood-blocking, and in the years 1823-1831 he created a series titled Thirty-six Views of Mount Fuji, examining Japan’s most famous peak. Contemporaneous to the creation of Grasshopper and Iris, Hokusai’s work during this time highlights his focus on landscape and natural subjects. Romantic and whimsical, this print in particular offers an example of the artist’s approach to smaller natural subjects, representing this microcosm as a vibrant source of life.

Illustrating the different stages of an Iris’ growth, Grasshopper and Iris opposes static representations of nature both in subject and medium. The inclusion of the grasshopper, as well as the half-eaten leaf he is perched upon, tells an active story of the many different elements of nature which quietly interact on a daily basis.

Both the medium and its process continue to echo nature’s collaborative efforts as the creation of such prints required a mutual understanding among a designer, engraver, printer, and publisher. While the publisher typically chose the theme of the work, it was not uncommon for artists such as Hokusai to determine the design. Once the design is created, it is transferred onto thin, transparent paper, which serves as a template from which a wooden block will be carved to mimic the design. Ink is then applied to the woodblock’s surface, a piece of paper is placed over the top, and a round pad is rubbed over the back of this paper. Typically made of inner bark of mulberry trees, the print paper was strong enough to withstand multiple rubbings. As polychrome prints such as this one required multiple woodblocks for each color, strong, absorbent paper was necessary to adequately reflect the different ink and pigments of the print.

These works could be easily reproduced over a thousand times on a single or set of blocks, maintaining the high quality, visual craftsmanship of the original. By rediscovering and streamlining this unique artistic method, Japanese artists were able to connect more deeply with this past cultural practice as well as widely disseminate a colorful, idyllic vision of their natural surroundings for both contemporary and future audiences.

A 20th century Japanese woodblock print with purple flowers with blue stems and washed background. Stamps and Japanese writing are in the middle right hand side of the work. Labelled on the reverse T. Adackis, Printed in Japan. 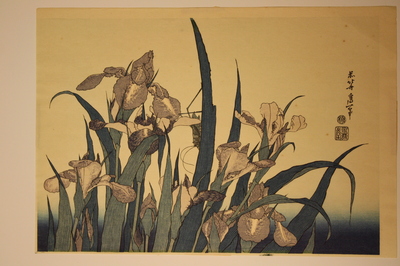