This collection of photos, assembled in a collage used in a news report, offer an intimate examination of soldier’s lives during World War II—while the soldiers seen here are assembling for events leading up to the D-Day invasion of 1944, they are casually posed, candid with each other. The work was published by a company called “Illustrated News,” in Hartford, Connecticut—this is a work of both journalism and memorial. Mounted on a large posterboard, the images may have been used in a presentation or for display. The soldiers’ smiles and casual posing offer a less glamourous and majestic view of war than we are accustomed to seeing—while these men are soldiers, they are still human, and still have tedious moments while working.

This collage was assembled and presented only days after D-Day, as a current event still unfolding. Compared to our more romantic hindsight view of D-Day and the Second World War in general, this is a more everyday view, more akin to what people on the homefront would be viewing and reading. Though the image at the top left of the collage, of soldiers disembarking an amphibious vehicle, resembles more famous images of D-Day, it is presented as a news item, rather than a commemorative image. As a piece of journalism, the work uses both words and images to set the scene, but there is a distinct tone in the work. The captions at the bottom of the collage demonstrate this reporter’s mocking tone, such as using “master race” in sarcastic quotes to describe the captured German soldiers in the lower right image—showing how the event was already being recognized as a turning point for the Allied forces. Compared to the other images in the exhibition memorializing war, this collage appears more realistic and straightforward, though an agenda is still present. All images of war have some sort of agenda inherent in their presentation, whether glorifying a victor, demonizing an enemy, or celebrating the efforts of soldiers. This collection of images provides a humanistic view of these soldiers, as well as a celebration of their efforts.

Poster of four images from World War II. Print is mounted on cardboard. Description under the print reads, "Photos radioed from France show 1 and 2 Yanks wading ashore from a Coast Guard landing boat under heavy German machine gun fire, in first hours of invasion. 3. Vets of last war will recall this 'Kamerad' attitude of Nazis captured by Canadian troops. Note enemy blockhouse in background. 4. More members of the 'master race' taken prisoners, while troops care for the wounded". 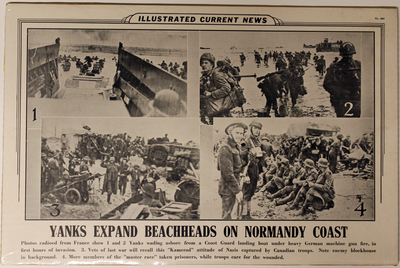