This postcard presents a view contrary to most “traditional” postcards— it does not present a grand vista or notable landmark. As a piece of architecture, however, the hospital appears notable. Centrally located in the city, this image establishes the building as an important feature of the St. Paul cityscape, as the city was growing and modernizing in pace with its Midwestern neighbors. Though the hospital is a place associated with disease, it is still a place closely linked with issues of permanence and impermanence—as hospitals become more modernized, they become places where many more people will enter (or leave) the world. Life begins and ends in these institutions, and research in hospitals can help create treatments that extend life and preserve materials needed for treatments and cures. This image hopes to preserve the significance of this building as a community landmark and focal point of the city.

This card was created in 1913, by the prolific Minneapolis-based photographer Charles J. Hibbard, and published by his own company. He took a variety of photos of significant buildings in the Twin Cities, including municipal buildings and estates of wealthy business owners.[4] Many of these buildings, including the hospital, have since been condemned or torn down—his images act as a preservation of these lost buildings. Hospitals have always been important structures within their communities—they provide treatment, support, and resources to community members who need it the most. It is a haunting souvenir, however, especially when viewed in the context of the approaching influenza pandemic of 1918. Though the hospital now appears as a beacon of hope and healing in its community, it could soon transform into a place of pain.

Postcard with black and white photograph of High Bridge and City Hospital in St. Paul Minnesota. Published by The Acmegraph Co., Chicago 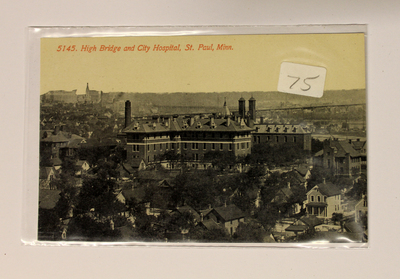