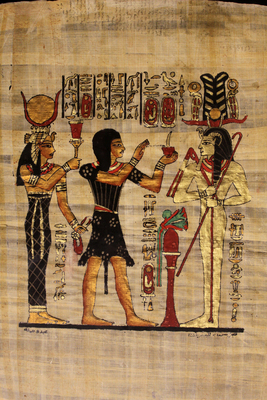 In response to a revival of interest in ancient Egyptian culture in Cairo in the latter half of the twentieth century, Egyptian artisans began to explore the antique papyrus paper-making and painting processes of their ancestors. Since then, scores of handmade papyrus paper paintings akin to those produced by ancient Egyptians have been crafted and sold in modern-day Egypt. Reproductions, such as this one, explore popular themes in ancient Egyptian culture. This particular image depicts an offering scene in which two figures present objects to a pharaoh or god. Filling the rest of the compact, rectangular composition are Egyptian motifs and hieroglyphs. The artist who recreated this scene painted the figures and symbols in dark hues and warm metallics that imitate the richness and mysticism of original Egyptian works.

The renewed manufacturing of these papyrus paintings sheds light on the definitive role of the papyrus plant in Egyptian culture. Now virtually extinct, the tall, fibrous plant once grew ubiquitously along the Egyptian Nile. Aside from being used to build boats, cordage, mats, containers, and a myriad of other products, papyrus was a political and religious symbol of ancient Egyptian culture. The abundant and lush nature of its growth in the Nile River Valley links it to motifs of life, eternity, and the Egyptian afterlife.

Most notably, however, papyrus was used for the manufacturing of paper. From as early as around 3000 B.C.E, scrolls of paper have been discovered in tombs and burial sites. For thousands of years thereafter, Egyptians have been able to write and keep a physical record of their history. Over time, however, the technique of Egyptian paper-making had been lost amongst the modernization of papermaking across the globe. Fortunately, modern scholars have investigated the history of ancient papyrus papermaking to understand the details of this technique. By arranging strips of the plant in a perpendicular and overlapping pattern, rectangular sheets are produced. These rectangles are then layered, flattened, soaked, dried, and often rolled into large scrolls. Creating scrolls of papyrus requires time and precision, and therefore, during ancient times, the material was often relegated to the creation of important documents. This often included religious passages, government documents, medical texts, manuals, or literature and art for wealthy patrons. Highly skilled, ancient Egyptian craftsmen perfected this process thousands of years ago in order to collect and conserve the thoughts, ideas, and traditions of their people. Institutions in Cairo, particularly the Papyrus Museum, have sparked a resurgence of papyrus papermaking. Out of this resurgence have come carefully crafted paintings and writings that mimic the hieroglyphic text and imagery produced by ancient artists.

By experiencing reproductions of traditional images that exemplify themes of afterlife and eternity in ancient Egyptian culture, viewers can better understand the means to which some went to hold onto the spirit of their people and their customs. Today, these reproductions are collected by enthusiasts of Egyptian art and culture. Appropriately, the gathering of these replications reflects a desire to preserve a past society that championed an everlasting spirit. The reconstruction of images upon papyrus highlights the cultural significance of a plant whose impact on a culture transformed the way of life for many.