Engraving of the Midland Railway Station in St. Pancras. Trains pull into the station with clouds of smoke billowing up to the ceiling with figures working on the tracks and waiting on the sides. The station is shown from an elevated and expansive view, with the figures and even the trains dwarfed against the grand scale of the tracks and high, detailed ceiling. 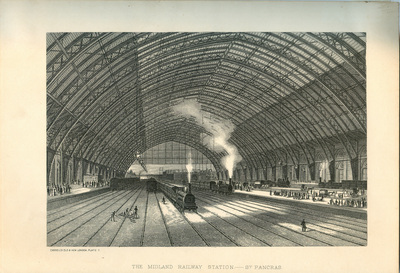