Coin collecting dates back to antiquity, when coins were sought after or purchased primarily as investments. During the Renaissance, coin collections were popular among monarchs and royal families, though the hobby was essentially limited to the very wealthy regardless. By the eighteenth and nineteenth centuries, however, coin collecting had become a hobby for the middle class, too. These collections were indicators of wealth and taste.

In the case of commemorative coins and medals from nineteenth international exhibitions, they became souvenirs that marked a memorable experience and historic event. Souvenirs are objects imbued with significance because of the owner’s memories associated with it. International expositions produced and sold a variety of souvenirs including glassware, spoons, saltshakers, books, maps, postcards, coins, and medals depicting the festivities and fairgrounds. Expositions celebrated progress and technological advancement, and the design of these medals reflects these central themes in addition to listing the exposition’s name, date, and city.

Many of the medals at the 1893 Columbian Exposition featured an image of Christopher Columbus (for whom the Exposition was named) in addition to a building or attraction. This 1893 medal features the bust of Christopher Columbus and the fair’s administrative building. This building was one of the fair’s architectural centerpieces, and was the typically the first building visitors entered if they arrived by train. Consequently, its rendering on the Exposition medal memorializes this building’s grand entrance. The official 1933 Century of Progress International Exposition medal features an aerial map of the fairgrounds on one side, and a male nude with arms spread wide and legs astride, flanked by the words Research and Industry on the other. The national exposition celebrated Chicago’s centennial as a “century of progress.”

People have collected coins and continue to collect them for different reasons—as investments, just for fun, or as souvenirs. Beyond functioning as personal mementos to those who were fortunate enough to visit the expositions, these coins and medals gave visitors the chance to share their experience and the themes of the with friends and family who were unable to attend in a tangible way. These objects once functioned as personal mementos for the expositions, and are now often highly sought-after by collectors for their rarity and historical significance.

This exposition medal came from the Chicago, IL exposition in 1933. On the obverse a male figure is seen with 1833 under his right foot and 1933 under his left, with the words research and industry on either side. On the reverse the exposition grounds can be seen with the words "INTERNATIONAL EXPOSITION CHICAGO 1933 A CENTURY OF PROGRESS" around the outside. 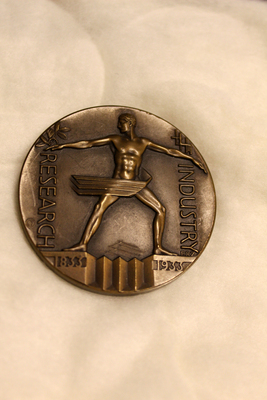