Athos: In the Shadow of Heaven; Stories about the Holy, Miracle-working, and Glorious Icons of the Theotokos and Other Saints on Athos 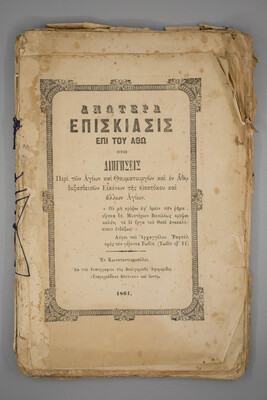 Purchase by the Department of Art History, 2022

Purchased by the Department of Art History via Ebay (user: vasia614) on March 9, 2022. According to the seller, who is from Greece, this book belonged to their neighbor, Antonis Prokos (Αντώνης Πρόκος) (1912–1993), a poet. The book was discarded with other items after his death, and recovered by the seller.

The eBay seller (Vasia Dritsa, over 1.7K items sold with a 100% satisfaction rating) lives in Greece. According to Dritsa, the book came from a book collection belonging to her Greek neighbor, a poet and a judge, Antonis Prokos (Αντώνης Πρόκος,1912-1993). Via eBay, Dritsa noted that in 2020, his family cleaned Prokos’s house and threw out all his books in large chests, leaving them on the sidewalk for anyone who wanted them. She found this book among those. He had a large collection of books: literature, poetry, religion, psychology, and freemasonry books. She also claims that the poet Prokos used to get in touch with other poets to get his copies of their books signed and was a subscriber to many literature magazines. Dritsa’s eBay sales started as an extra income after the economic crisis in Greece. She does it full time now, acquiring items from flea markets and sidewalk sales.

According to the official Island of Sifnos website, “Antonis Prokos was an “author, award-winning poet, judge, President of the Court of Appeal and member of the Society of Greek Writers.” He is known as part of the “wave of Sifnian teachers” who deeply “involved themselves in the cultural furtherment of Hellenism and were “leading lights and educators in all aspects of the arts and letters.” He spent a significant amount of time in the Sifnos islands, but how he initially acquired the book is unknown. It is impossible to track the entire path of the publication because so little has been recorded regarding its status as a piece of literature. There is not proper documentation to meet the standards set by AAM, AAMD, and the 1970 UNESCO Convention, but notably the book did not leave its country of origin before 1970, therefore not subscribing to the UNESCO standards.

Poor quality, shoddily bound together with twine centered in the middle of the spine. The cover is missing, and various pages differ in size. The pages are delicate, and worn, and covered in various stains.The edges of the paper are ripped and aged. September 2022. - Raya Kenney ('25)

This book describes thirty-one miracle-working icons owned by the monasteries of Mount Athos, Greece. Each chapter includes a lithograph print and a brief description of the miracles that the icon has performed. One of these chapters features the icon of the Virgin Gerontissa, a miraculous image held at the Pantokratoros Monastery. This image of the Mother of God received the appellation Gerontissa (“Our Lady of the Elder) when it miraculously spoke and commanded a younger monk to follow the orders of an elder monk.

The Mother of God is shown in her entirety, touching the frame from top to bottom. She stands, turns, and gestures to the left. She is draped in decorative robes; her hands emerge from the folds and extend from her body. A vase, overflowing with oil, sits at her slippered feet. Its abundance is meant to reference another miracle in which the monastery's oil jars were miraculously filled after the abbot prayed in front of this icon. A giant halo, encrusted with precious gems, surrounds her head. There is a sense of openness about the image; her gaze is turned outward, toward the viewer, but the eye contact is not direct. Her intercessory hand gestures greet us, and acknowledge our presence; it is as though she is waiting for the viewer to interact with her. Her reverence and power are evident.