Medal Commemorating the 400th Anniversary of the Discovery of America (Obverse) 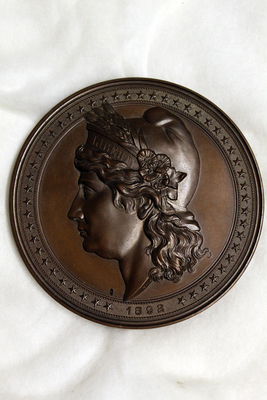 All markings in accordance with the research of the National Maritime Museum, Greenwich, London.

A medal commemorating the 400th anniversary of Christopher Columbus's arrival in America. The obverse features the head of Columbia with a cap marked 'LIBERTY' and with wheat ears and flowers. 1892 is also stated on the obverse directly below the head. On the reverse Christopher Columbus and his followers are seen stepping ashore while natives hide. The reverse also states 'DEDICATED TO THE AMERICAN PEOPLE IN HONOR OF THE 400TH ANNIVERSARY OF THE DISCOVERY OF AMERICA/ UNITED WE STAND DIVIDED WE FALL/ 1492'.