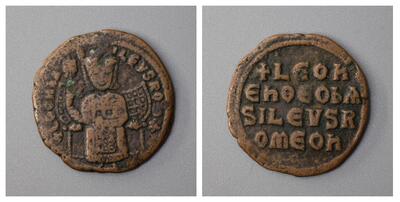 The condition of the coin is fair. The coin is well worn along its face and edges to the extent that it is difficult to distinguish the details of the imagery. The obverse shows discoloration on the top of the headpiece (12 o’clock), the right hand (10 o’clock), next to the left foot (6 o’clock), and within the lettering on the right side (3 o’clock). The discolorations are a mixture of white, green, and dark red. The inscription is partially illegible and the emperor’s face is almost completely worn away. On the reverse, there is a dark red and green discoloration on the center letters of the first two lines. There is also a small chip at 2 o’clock as indicated by a dark chestnut indentation. The inscription is fully legible. - Hollen Knoell (’25), December 2022

Leo, Emperor of the Romans

Leo by God Emperor of the Romans

Grierson, Philip. 1973. Catalogue of the Byzantine Coins in the Dumbarton Oaks Collection and in the Whittemore Collection, vol. 3, Leo III to Nicephorus III, 717–1081. Washington, DC: Dumbarton Oaks Research Library and Collection, no. 5, pp. 515–516.

This follis of Leo VI depicts the Byzantine emperor on the obverse sitting on a lyre-backed throne wearing a crown and a ceremonial garment. One hand is raised holding a scepter, the other resting in his lap. This small copper follis was worth 288ths of a gold coin in the ninth-century which could have bought 0.31–0.35 kg of wheat (Laiou 2001, p. 721).

Comparing the visual cultural significance (iconography) of Leo VI’s follis with that of the contemporaneous “Narthex Mosaic of Hagia Sophia,” illuminates the propagandistic implications of the coin. Within the mosaic, Christ sits at the center of the composition directly facing the viewer on a lyre-backed throne wearing a white tunic with one hand raised and the other holding an open book in his lap. An unnamed emperor is shown bowing (proskynesis) before Him possessing the customary features and clothing of a ninth century emperor (Oikonomides 1976, pp. 158-170). The prostrate imperial figure illustrates an essential aspect of a Byzantine emperor — his ability to be in the presence of Christ, which gives him a higher status to all other mortals (Maguire 1996, p. 249).

During the ninth century, emperors began depicting themselves on coins akin to the established iconographic type of the enthroned Christ. This practice began with the follis minted by Basil I, Leo VI’s predecessor and father (Grierson 1973, p. 154). Both emperors crafted their numismatic self portraits in an imitation of this iconography of Christ sitting on a lyre-backed throne.

I conjecture that Leo VI intended to extend the power of Byzantine emperors by comparing himself to Christ through traditional religious imagery. Since the follis is visually reminiscent of the narthex mosaic, the image of the enthroned Leo VI suggests that his power and influence is equivalent to that of Christ (Breckenridge 1980, pp. 252). The visual juxtaposition between an enthroned emperor and an enthroned Christ draws a strong parallelism between one ruling on earth and one ruling in heaven (Walker 2019, p. 286). Thus, by enthroning himself similarly to Christ, Leo VI insinuates on his follis that the title of emperor is akin to the title of Christ (Walker 2019, p. 286). By inserting himself into the seat of divinity, Leo VI has asserted that Byzantine emperors not only have a place in the heavenly court with Christ but they also share in a higher power.

By embellishing folles with religious propaganda, Leo VI, as well as many other Byzantine emperors, further supported the ideology that emperors were prominent members of the heavenly court and should be idealized as such (Walker 2012, p. 2).

Panofsky, Erwin. 1955. “Iconography and Iconology: An Introduction to the Study of Renaissance Art.” In Meaning in the Visual Arts: Papers in and on Art History (Woodstock, NY: The Overlook Press, 1974), 26–54.

Walker, Alicia. 2019. "The Emperor at the Threshold.” In The Emperor in the Byzantine World, edited by Shaun Tougher, 281–321. London: Routledge.