Follis of Anastasius I 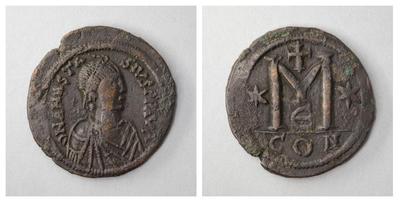 The condition of the coin is good; the inscriptions and imagery on both sides are legible. The outer rim is dented — notably on the top left obverse side. Particular details are worn down: the hair, clothes, face, the six-pointed stars on the reverse. The color is now a deep brown, with hints of burnt orange and green presumably from oxidation.

Bellinger, Alfred R., and Philip Grierson, eds. 1966. Catalogue of the Byzantine Coins in the Dumbarton Oaks Collection and in the Whittemore Collection, vol. 1, Anastasius I to Maurice, 491–602. Washington, DC: Dumbarton Oaks Research Library and Collection, p. 21, no. 23i.6.

In comparison to coins of the twenty-first century, this follis of Anastasius I (r. 491–518) is fairly large and hefty. On the obverse, a serrated circle surrounds the profile of the emperor. The top of his head divides the inscription (DNANASTA|SIVSPPAVG, meaning Our Lord, Anastasius, Eternal Augustus), visually signaling that his image is the most important aspect of the coin’s design (Grierson 1999, pp. 38–41). Anastasius wears a diadem, a type of crown that was initiated by Alexander the Great in the fourth century BCE, and continued by late Roman emperors beginning with Constantine I in the fourth century CE (Oxford Classical Dictionary, s.v. “Diadem”). Anastasius dons the consular costume: the trabea, a large piece of cloth generally dyed purple, crossed over the chest, and pendilia with pearls hung across the breast. The consular costume is associated with the happiness of the people and the glory of the city, situating the emperor as the source of this prosperity (Galavaris 1958, p. 103).

The reverse features a large “M,” meaning 40 nummi, “CON,” an abbreviation for Constantinople, its place of minting, and a small “E,” meaning the fifth officina, or workshop, in the city where the coin was minted (Grierson 1999, pp. 5, 38–41). A cross is placed above the “M,” and six-pointed stars are to the left and right. Bronze and copper coins such as this follis were used mainly by the lower classes. Its value in relation to the highest denomination coin, the gold solidus, was 1:288. The follis was an integral part of Anastasius’s reform of the monetary system that ended a long period of inflation. Marking the value (M=40) was one of his innovations that the people found quite pleasing as it prevented arbitrary reevaluations of worth (Morrisson and Sodini 2001, pp. 213–14). Perhaps the best way to quantify the value of a follis in a manner relatable to modern times is to learn what the average person would have used a follis for in their day-to-day life. In the fourth and fifth centuries a donkey would have cost around 3 solidi, meaning it would have cost 864 folles. 426.58 liters of barley cost 96 folles; 4.5 folles could therefore buy 1 liter of barley (Morrisson and Cheynet 2001, pp. 828–44).

Anastasius's copper and gold coins closely mirror those of his predecessors. The coins of Zeno, the previous emperor, and those of Anastasius share practically the same imagery, including the trabea and diadem. There was a strong tradition in the fifth century from which Anastasius did not want to depart even as he made monetary innovations. Anastasius desired the people to associate him with past emperors, specifically Zeno. Ariadne, Zeno’s wife, appointed Anastasius to the role of emperor against the desires of the elites, and she later married him. Aligning himself with Zeno, at least in terms of imagery, could perhaps have been an attempt to quell some of the displeasure arising from his appointment.

Morrisson, Cécile, and Jean-Pierre Sodini. 2001. “The Sixth-Century Economy.” In The Economic History of Byzantium: From the Seventh through the Fifteenth Century, ed. Angeliki E. Laiou, 171–220. Washington, DC: Dumbarton Oaks Research Library and Collection.

Morrisson, Cécile, and Jean-Claude Cheynet. 2001.“Prices and Wages in the Byzantine World.” In The Economic History of Byzantium: From the Seventh Through the Fifteenth Century, ed. Angeliki E. Laiou, 815–78. Washington, DC: Dumbarton Oaks Research Library and Collection.

Morrisson, Cécile. 2001. “Byzantine Money: Its Production and Circulation.” In The Economic History of Byzantium: From the Seventh Through the Fifteenth Century, ed. Angeliki E. Laiou, 909–66. Washington, DC: Dumbarton Oaks Research Library and Collection.