Sketch of a General

During the 18th century, the idea of depicting soldiers in action was attractive to artists but difficult to achieve. As an alternative to portraying battle scenes, artists began observing more peaceful endeavors of military life. This image seems to preserve one of the more quiet moments of military life. It was as important to capture the expression of a soldier, as it was to depict a battle scene. In doing so, the artist privileged the human being and not just the historical event. Because this general is not shown in the company of other soldiers, the artist emphasizes the power of the individual. This sketch features an unknown general clad in military garb. The piece appears unfinished, almost impermanent. The pensive general averts his eyes from the viewer, staring out into the distance. The sketchy impermanence of the figure echoes the role of the general pre-combat. He seems to be in motion, about to take action or salute to someone. The sketch is small, only stretching 9.25 x 6.5 inches, which compounds themes of collection and cultural memory. We catch ourselves questioning, who would own this sketch and why? What is the appeal of its lack of attention to detail? This illustration may elicit a memory of war. It seems to loosely preserve the general’s identity through a few sketchy lines and a pensive expression. This item could be something a family collected to remember its loved one who fought in war and a way to preserve their memory. Before photography was a prevalent personal art form, a portrait like this might have been the only way a family could hold onto and collect an image that honored a person. From the ancient Lascaux cave drawings though the 21st century, we record our narratives, and images of those we deem important on anything we find. This sketch is a cultural memory; it reflects time and space without much background. But it is intimate. We feel we know the subject. The absence of a background suspends the general in time. He floats amidst the borders of the page with nothing surrounding him but a slightly graphite stained sheet of what seems to be newsprint. The small size of it makes the work relatable. We could hold it, preserve it for our family, tuck it into a book of memories or collect it like a souvenir. 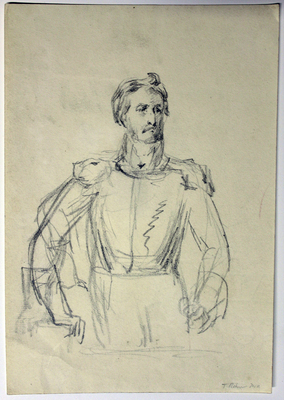