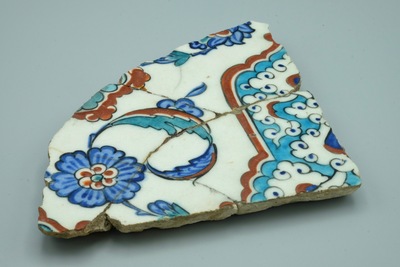 This tile fragment shows us floral and incomplete designs that are reminiscent of Chinese pottery styles. The serrated leaf motif in particular seems to draw from the so-called saz style, developed by the Ottoman Court due to a push for new artistic techniques. Further court influence can be seen in the use of the fine lines and patterning also found in metalwork produced at this time. These motifs, along with the cloud-like wisps, and color palette are comparable to other late 16th- and 17th-century Iznik wares (cf. New York, The Metropolitan Museum of Art, 02.5.102, 66.4.13). This fragment is made up of five pieces affixed with glue, with felt feet suggesting it previously served as a coaster.

Decorative tiles like this fragment would have been present in both courtly and religious spaces, and this type of non-figural ornament is fundamental across artwork of the Islamic world. We should consider this fragment as a part of a much larger tile work that likely covered a large section of wall.

The opaque white background of the tile fragment shows a longstanding tradition and early link to Chinese porcelain. Starting in the 9th century after exposure to this pure white high-fire pottery production in China through trade and travel, efforts were made to reproduce it in the Islamic world. When the technique could not be achieved, potters began imitating porcelain through the use of white opaque glaze on lower-fire pottery (earthenware, stoneware), and then later the practice was picked up by tile workshops. This original mimicry also saw the use of painted blue designs and similar motifs seen on Chinese goods copied onto Islamic products.

As the efforts to develop porcelain were not possible with the resources in the Middle East, the development of glazing techniques and colors flourished, beginning with the Seljuks in the 11th century. Underglazes were created using ground silica, and introduced a new color palette to ceramic goods. This rich Seljuk tradition became important in informing the work coming out of the later Ottoman Empire. The Iznik tradition, coming out of the Iznik province of present-day Turkey, is said to have had ties to the Iranian workshop, Masters of Tabriz, who were influential in the development of these colored glazes and high quality craftsmanship under the Ottoman Empire. The Iznik workshop is famous for their red underglaze, aptly named Iznik Red, seen here, created by the use of iron oxide mixed with a glaze base of alkaline-lead and glass powder (technique known as fritware). This color was difficult to produce and needed to be applied in thick layers underneath the glaze to create the proper coloring; this is visible in the raised surface of the red colored sections. Produced in perhaps the most prestigious workshop of its time, Iznik tile work was highly prized and respected. See also 2020.368.