Gradual Leaf with Architectural Plan for an Altar 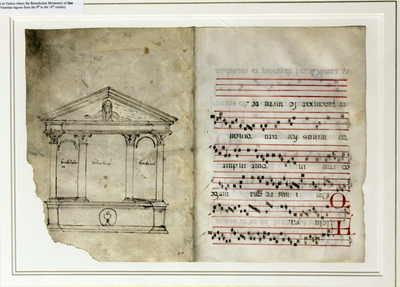 Purchase by the Department of Art History

This gradual leaf features both sheet music for plainchant and a sketch of an altar featuring the Madonna, St. Benedict, and St. Servolo. On the left half, a pen and ink drawing depicts an altar featuring classical architectural elements, reflecting the renewed interest in ancient Roman architecture during the Italian Renaissance. Although adoption of a structure resembling pagan Greco-Roman temples for the Catholic ritual of the Eucharist seems a bit ironic, it nonetheless reflects the Italian embrace of classical aesthetics and proportions, and perhaps speaks to a belief in bolstering a powerful religion with equally awe-inspiring aesthetics.

The specification of Saints Benedict and Servulus to flank the Virgin Mary points to a Benedictine monastery on the island of San Servolo in the Venetian lagoon. Beginning in 810, San Servolo was occupied by Benedictine monks until the 16th century when they were joined by nuns. Although it is impossible to verify whether the drawing is of a proposed or actual altar, a connection to the Benedictine church on San Servolo is plausible.

This leaf is also an example of plainchant and likely came from a liturgical book. Liturgical books were notoriously expensive and rare prior to the fourteenth century, not to mention that few people could read them in the first place. These books slowly became more common, however, and were utilized to help people memorize psalms, chants, and hymns. Their text, which made frequent use of abbreviation, still required readers to already be knowledgeable about or familiar with the contents. Religious men such as the Benedictine monks at San Servolo would have been the primary intended readers.

Choirbooks—including graduals and antiphonarium—were primarily printed in folio format. They were much too cumbersome to transport and thus remained in churches. This leaf, however, is roughly half the size of a folio and nearly matches the dimensions of a quarto. In the late fifteenth century, the quarto and octavo became more common formats for liturgical books in a shift that also signified changes in who owned them, how they were read, and where they were kept. Their smaller size made them more portable, thus enabling religious clergy to have and carry their own personal liturgical books around with them, and increasing the possibility for laypeople to encounter or own them, too. The change also challenged the longstanding tradition of communal recitation in monasteries by supplementing private individual prayer with a textual aid that clergy bought already printed or compiled themselves by copying preexisting manuscripts. Although it is very difficult to determine whether the original source from which this leaf was taken was entirely blank or appended, it seems reasonable to believe that a monk at San Servolo—or, though less likely, a nun—compiled and transferred the plainchant onto the page or rendering the architectural plan on a blank page.

The four columns of the altar create a triptych with panels containing St. Benedict, the Virgin Mary, and St. Servulus. The three panels show an origin in Venice where the Benedictine Monastery of San Servolo was in the Venetian lagoon. It is attached to a 15th century blank leaf that was next to a gradual.