More than any other event during World War II, the bombing of Monte Cassino exemplifies war’s ability to destroy longstanding relics of history, calling into question the value of cultural heritage in times of conflict. St. Benedict founded the Italian monastery in 529, atop a great hill in the Roman countryside. At Monte Cassino he laid the foundations for the Benedictine order, a highly influential sect of Catholic monks. During the Middle Ages, the Benedictines were important patrons to the arts, constructing grand monasteries throughout Europe. As an important site in Benedictine mythology, Monte Cassino was seen as the ancestral source of European cultural.

In the fall of 1943, German forces took over a village located in the foothills of Monte Cassino, as it served as an important strategic barrier between the Allies and Rome. For three grueling months the Allies attempted to drive the Germans out of the village — suffering casualties in the thousands. The Germans were given strict orders from their commanding officers to not enter the monastery, respecting its sacristy as an important cultural site. This was unbeknownst to the Allies, who believed that high-level Germans were using Monte Cassino as a command post. In February of 1944, a British soldier intercepted a German radio broadcast purporting that the officer’s headquarters were in the “Abt.” The soldier mistook Abt. as shorthand for abbot instead of its true translation, Abteilung (bataillon). Before they realized the mistake, bombers had been sent out.

With 1,300 bombs and 1,200 incendiaries, Allied aerial forces leveled the ancient monastery within a single morning. Over 400 civilians — mostly women and children seeking refuge from Germans Forces — were killed. The Allies were not only criticized for killing civilians, but for their lack of respect towards such an important historical site. Despite the carnage, the Allies refused to admit any mistake, as the leveling of Monte Cassino untimely opened up the road to liberate Rome.

The bombing of Monte Cassino incited a media firestorm across the globe, widely discussed in newspapers, magazines and radio broadcasts. Wreck Monastery is a relic from this discourse. The cardboard poster was hung in American shop windows, with the hopes of enticing pedestrians to purchase newspapers covering wartime events. As an advertisement, Wreck Monastery derives its power from the harrowing central image. Charred trees stand in a field of stone rubble, suggesting a loss of both life and civilization. The text stresses the speed at which the ancient structure fell, an idea enhanced by the apocalyptic image.

The fact that Allied bombers leveled the ancient structure in less than a day was extremely troubling for many, suggesting the end of European culture. Ironically, Monte Cassino had been destroyed and rebuilt four times since it’s founding in the 6th century; its original Benedictine structures were lost long ago. Monte Cassino was completely restored to its original state over a period of 35 years after the bombing, symbolically healing enduring wartimes wounds.

Description under the print reads, "Cassino, Italy- Overlooking Cassino from its hilltop location, the ancient Benedictine Monastery is but a shell-torn ghost of the once graced Monastery Hill. Used as a fortress by the Germans, the structure was pounded intensively by Allied aerial and long range artillery pieces. Now, in spite of the great gaps torn in its walls, the Allies hope to restore the monastery." 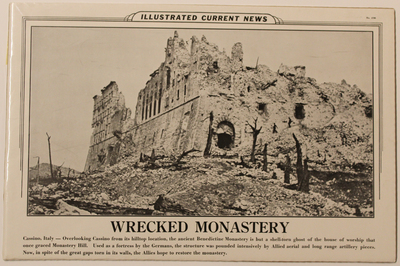