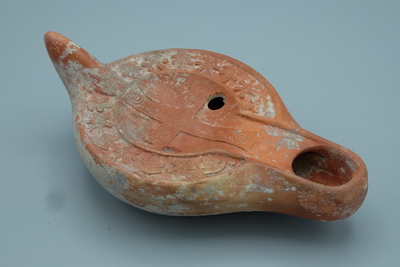 Purchased by David P. Harris from Julia Schottlander (Tetragon) in London on June 13, 1992.

This terracotta lamp, broadly attributable to 5th to 6th century North Africa, features a cross with several symbols surrounded by an ornate border. Vegetal forms and an Iota-Chi Christogram (a representation of the Greek initials for Jesus Christ) adorn the border, while the cross near the lamp’s filling holes features concentric circles and diamonds. The lamp is well-preserved, with some wear apparent on the right side (when viewed from the handle-end) and discoloration from oil residue near the spout. There is also a layer of dirt around the outside and the interior. The whole lamp fits comfortably into the palm of an adult hand.

Lamps like this were manufactured by the thousands in North African factories, especially in Tunisia, by molding two pieces of clay and fitting them together with slip. This form was widely reproduced, with similar elements like concentric circles appearing as consistent motifs in other, similar works. Lamps were the preferred form of lighting in Early Byzantium and would have been found in almost every home, workshop, or temple. Terracotta lamps would have been the standard among common people because it was a relatively cheap material that could be mass-produced, while silver or glass lamps would have been chosen to light the homes of the elite.

The largest symbol, the cross, is an apotropaic form of protection for the user. As demonstrated by John 8:12 (in which Jesus declares that he is the “light of the world”) there is a deep association between the power of Christ and illumination. This lamp would have combined the light produced by the flame with the explicitly Christian and protective symbol of the cross. The lamp also features the apotropaic symbols of concentric circles and vegetal, organic forms. Concentric circles were believed to ward off evil. Because these circles are also associated with mirrors, the lamp exhibits an interplay between that symbol's “reflective” powers and the actual illumination created by the flame, extending the protective qualities of the object's iconography into the owner’s environment through the light that it produced. The lamp’s leafy, vegetal border is another symbol that would have been believed to attract wealth and prosperity to the owner. The circles and leaves work together with an abbreviated Iota-Chi Christogram in the border, another example of an iconographic reference to the protective powers of Christ acting in combination with literal illumination. The lamp's iconography demonstrates that, more than just a piece of decoration, it was a functional piece of material culture that would have made spaces both usable through lighting and safe through the deployment of protective symbols.