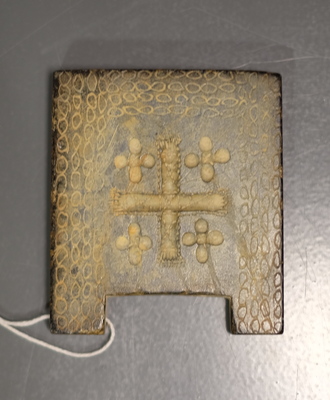 Purchased by David P. Harris from Chris Martin-Zakheim (Iconastas) in London on October 30, 2000.

"The plaque is a square with two foot-like extensions. Both front and back display a large, deeply engraved central cross whose arms are decorated with X-shaped crosses and which have 'fringed' ends. Between the arms of this cross are four smaller, deeply engraved crosses consisting of a square center and four round and egg-shaped 'arms,' these being decorated with tiny X-figures. Each face of the piece has a left, right, and top border consisting of four rows of small, lightly incised egg-shaped figures. Three rows of such figures also decorate the left, right and top sides of the plaque. All the engraved areas of the dark steatite have been filled with what appears to be a light-brown clay -- perhaps from the soil in which the piece was buried. The function of the plaque is unknown, but four holes have been drilled through and between the two 'feet,' suggesting that this piece was originally attached to another." Description by David P. Harris.