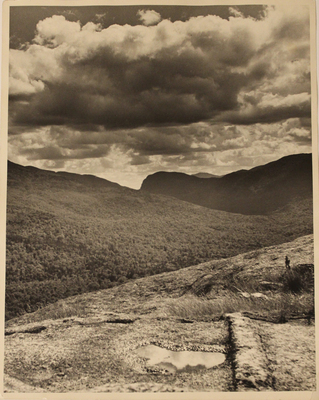 Farmer’s mountainside photograph crafts a breathtaking natural scene akin to the oeuvre of Ansel Adams, using the theatrical play of light and shadow to illuminate the landscape. Beyond the rocky summit pocked with pools of water lie gorgeous rolling hills. Dense clouds hang languidly in the summer sky casting their shadows onto the rippling earth below. Through a seemingly static landscape movement is created through the diagonal compositional division, and the impressive detail of the clouds evokes a scene which could change at any moment. The image is ultra-crisp with a depth-of-field that is infinite. The only real loss of detail is at the horizon where the atmosphere beautifully blurs the forms of the hills as they recede into shadow. Excellent tonal range enhances the rich image. There are dramatic points of contrast with the reflection in pool to the dark shadows cast by the clouds.

Mt. Holden is part of the Western Victoria Volcanic Plains, which is located in Sunbury in Southern Australia, in the State of Victoria. With a summit of 412m, the mount is part of a series of heavily eroded volcanic hills. Sunbury is about twenty-five miles from Melbourne, and would be a worthwhile destination for the tourist willing to make an excursion to experience Australia’s geological/natural landscape. To get his shot, Farmer had to hike up the mountain with a tripod and large format field camera to the summit. Staking the camera tripod is similar to staking a flag. Farmer’s print cannot resist the social implications of the white male landscape photographer and destination photography. His work, implicitly asserts a colonial gaze in which a place is “discovered” once it has been documented by a white man.

Popular fascination with the stylistic cannon of the group f/64 is lodged in the conventional belief that photography functions as a representation of nature itself rather than a method of representation. Copy and medium are transparent, leading to the false perception of unbiased and true representation. The immediacy and legibility of images supports this folklore. Realism is now imagined through assimilation of everyday details, or the monumentalization of detail. Additionally the rapid commercialization of the photographic medium at the turn of the century stoked the fires of travel photography. Photographs hold the social power to record and verify the presence of a traveler and the authenticity of a trip. Photographs are interpreted as documents with connotations like - informative and evidential, records, transcripts, displays, and copies. Photographs help people to take possession of that in which they feel insecure which serves as an underlying factor driving the purchase of travel photography. As an 11x14 print, the image resists the mass commodification of a postcard, but it still remains an easily possessable copy that one could purchase in order simultaneously memorialize and validate their trip to Mt. Holden.