In Sickness and Health, childhood frivolity is contrasted with childhood illness, appealing to the emotions of Victorian audiences. At the center of the image, two young girls joyously dance to the music of a nearby organ grinder. Another young girl sits off to the side, noticeably weakened by sickness. While immobile, the child is not immune to the uplifting power of music, as a slight smile stretches across her face. Her mother and brother who sit beside her, however, seemed too preoccupied with the young girl’s condition to enjoy the lighthearted scene. In contrast to the other children, the young boy is visibly cross, perhaps angered by his sister’s inability to fully participate in the surrounding activity.

The effects of childhood illness were felt amongst all social classes in the Victorian era. By the end of Queen Victoria’s reign, a quarter of children born in Britain did not make it through the first year of life. Childhood illness was a common theme in the art and literature of the day, eliciting great sympathy from Victorian audiences. In the print, the children’s contrasting emotions are presented in a passing moment, expressing the uncertain nature of childhood during this time. Sickness and Health shares many similarities with the literary work of Charles Dickens, who similarly treated tales of childhood suffering with great compassion. Dickens’ work was popularly accessible, printed in cheap serial publications. Similarly, as an engraving Sickness and Health was substantially cheaper to purchase than other ‘high art’ forms.

This engraving is based off an 1843 oil painting by Thomas Webster, an esteemed member of the British Royal Academy of Arts. Webster originally exhibited the work alongside a quote from a William Wordsworth poem: “the cheerfulness of innocence serves to mitigate distress.” The painting was met with high praise when first exhibited, with one critic praising the artist for depicting his subjects with “infinite grace and pathos.”

Shortly after it was exhibited at the Royal Academy, John Sheepshanks, an important patron of Modern British art, bought the painting. Sheepshanks, like other aristocrats of the era, strived to make art accessible to the public, a belief reflected in his relationship with Sickness and Health. In 1846 Sheepshanks commissioned an engraver, William Finden, to create an exact copy of Sickness and Health. Sheepshanks did so in order to bring Webster’s work to a wider audience through a more economically accessible media. The work on display is one such print. Nearly 10 years after commissioning the print, Sheepshanks donated Sickness and Health, along with 500 other works from his collection, to the newly-opened Victoria & Albert Museum. Sheepshank formidable donation is the basis of the V&A’s collection of 19th century British art.

An engraving by William Finden based on the original painting by Thomas Webster. This engraving was engraved from the original picture for the collection of John Speepshanks, Esquire. It was published by J. Hogarth, at 5 Haymarket St., London. Marked below image with information, including that it was printed by M. Lueen and the date, 1846. Stamped lower right & left margins, stamped lower center margin. 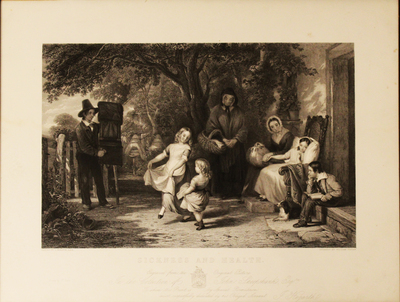