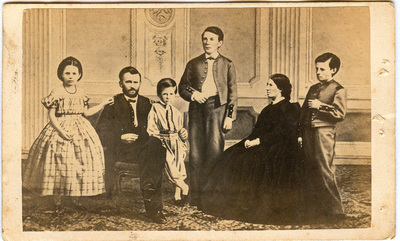 This small photograph, although taken across the globe from the previous Swedish Family Photograph (2015.114), exposes many of the same concerns and strategies of early photography. As with the previous photograph, this image is a photograph of a family taken in a studio while the family dons their best clothing, clothing that was in the highest fashion for their time. This image is further complicated by the fact though that the mother appears to be dressed for a funeral. The momento mori quality of this photograph is then further heightened, as the photograph is not only used for the memory of this family, but also for the person whose life was honored in the funeral. During the period in which this photograph was taken, commemorating the dead was extremely important. This Victorian era phenomenon has been classified as the “Cult of Memory,” as mourning practices were explicitly laid out in order to ensure that the dead were properly remembered. Although this phenomenon has complex origins, one of the contributing factors to the importance of this “Cult of Memory” was the high mortality rates, particularly infant mortality rates, during the 19th century. Death was seen in a romantic way, as it was not seen just an end, but rather it was seen as the transition into the peace of heaven where one could be reunited with loved ones for eternity. Because of this, this “Cult of Memory” emphasized the idea that death was not something to be handled in isolation and the person’s life must be properly commemorated. Death was more regular and less feared than in our contemporary era. Images like this one emphasize just how different our modern conceptions of death are and the rituals around it are so different than earlier eras. Today, death is an extremely private matter as well as a matter that is painted as entirely frightening. Images like this show the importance photography had in mourning rituals. Photography took on an integral role in this commemoration, as it both allowed mourning rituals and customs to be codified in visible form and allowed for the creation of new mourning customs, such as funeral photography as seen in this particular photograph. Photography continues to be important in our modern society, as although funeral photography is no longer is typical custom, photographs are used in funerals and beyond to commemorate the lives of the deceased. These small studio portraits give such a sense of photography’s capacity to commemorate and the larger human impulse toward memorializing our lives.