Belonging to a miniature atlas of Bohemia used during the Seven Years War, this map depicts the city of Buntzel. Bohemia, now a part of modern day Czech Republic, was the location of many battles during the Seven Years’ War (most notably the Battle of Prague during which Prussia invaded Bohemia). The miniature atlas that the image belonged to mapped the entire region and contained plans regarding war strategy.

Focused on the oval-shaped domain of Buntzel, the boundaries of this region are indicated by curving lavender lines which separate it from Lusacia and the Elba River. Filling the boundaries are the Spanish titles of specific site locations within the city which are amassed in a dense conglomerate of elaborate, black, script. Tiny illustrations of geographic features delicately dot the page amongst the text. The map is titled in the top left hand corner, and numerical scales colored in turquoise line the borders of the page. The aesthetic features of this image would have been consistent with the maps found alongside it in its original atlas.

The cartographer, Tomás López, who created the atlas which Circulo De Buntzel belonged to, produced maps relating to Spain, Bohemia, and Spanish America during the 18th century. During this period of growth for Spain and its allies, cartography became increasingly popular; maps were essential for recording the vast, new, geographical landscapes that they were constantly encountering. The regions that López and other cartographers depicted were unstable and ultimately temporary. Presently, they provide an aesthetically-pleasing glance at an image dense with historical, geographical, and tactical information.

At the time, Lopez’s intentions were most likely to produce a map with practical, wartime, applications. A viewer today, however, may gather meaning from it that is altogether disassociated from Bohemia or the Seven Years’ War. In its present state, the isolated map evokes an esoteric quality about a region of Europe’s geographic history. Because Bohemia no longer exists, the map acquires a sort of narrative characteristic--one that wishes to be held onto, interpreted, or investigated. Its compact size contributes to this. It feels like a component to a larger history or as if it is to be collected and become a part of something new. Separated from the context of its atlas, it becomes less of a token of whatever greater purpose it once had. The viewer’s idea of Buntzel becomes somewhat simplified. The map preserves the concept of a former city that is disassociated from the more harsh, wartime tactics it possesses. Instead, in its present state, “Circulo De Buntzel” presents an attractive outline of a distant time and region. 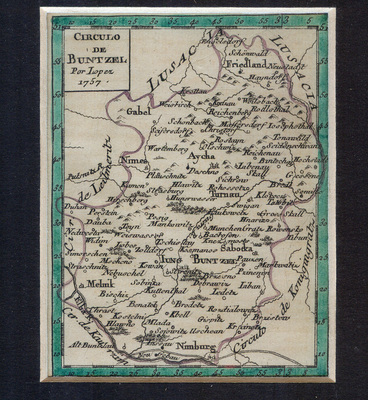