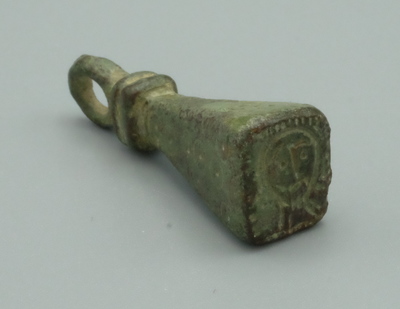 Purchased by David P. Harris from Julia Schottlander (Tetragon) in London on October 24, 1992.

This seal, cast in bronze, tapers gently from the top to base in an elongated pyramidal-triangular form. Each of the object’s four sides is decorated with six to seven concentric circles. The underside of the base is engraved with a simplistic and highly-stylized human face. In comparison with other Byzantine pendant-seals, one of which in the Christian Schmidt Collection (no. 1384) that depicts the profile busts of Saint Peter and Saint Paul on its base, it appears very likely that the face engraved on the base of this seal is also an image of a saint or holy figure.

Perfectly designed to rest between a person’s thumb and forefinger, the seal’s balance and weight distribution (bottom-heavy) facilitate the seal’s function via the downward movement of a stamping or pressing motion onto another object (ordinarily wax or clay). Furthermore, the seal’s small size and the hollow loop atop the neck suggest that it was worn on the body via attachment to a leather or bronze chain. The pendant would have hung around the wearer’s neck, resting on the chest, and would likely have been worn this way every day.

This seal was used for personal and domestic purposes related mainly to the physical security of documents, correspondence, and household goods or valuables. It is important to note that sealing these items would not have sufficed to physically prevent theft or the like, but would have deterred other household members from investigation and would additionally have served (via the broken seal) as a reporting mechanism should illicit activity occur. Made of bronze, a widespread material during the Middle Byzantine period, this seal was likely owned by a social non-elite for day-to-day purposes. The iconography on the seal’s base and sides (stemming from both pagan and Christian traditions) implies spiritual security as well as physical security (both concentric circles and holy figures were believed to contain the power to ward off physical or spiritual harm), and creates a dual-function as both practical tool and supernatural shield. This protective power would have functioned independently of the owner’s usage, and this autonomy demonstrates the surprising amount of agency and animacy this seal possessed.