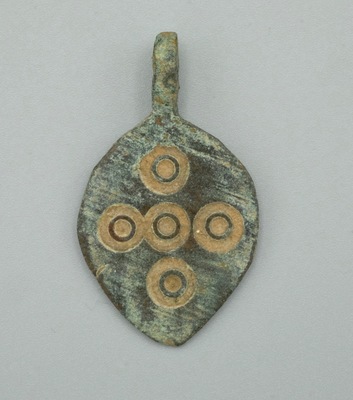 Purchased by David P. Harris from Julia Schottlander (Tetragon) in London on June 13, 1992.

This tear-drop-shaped pendant has a large bail at the top allowing for it to be fastened or worn. Its small size and light weight allow the object to be easily worn as an enkolpion—any object, typically with Christian imagery, worn on the chest. The pendant is branded with a cross-like symbol, consisting of five concentric circles placed perpendicularly. This type of design is an apotropaic motif very common in the Early Byzantine Period. The concentric circles signify mirrors, which many believed were able to deflect evil forces and foes. The utilization of this motif may have also extended into the afterlife, as it has been uncovered from burial sites. It has also been found on other types of objects such as hair combs, lampstands, and lintels.

The symmetrical arrangement of this motif alludes to the cross, a prominent symbol of holiness and protection in Christianity. The combination of the concentric circles motif and the cross is a very common pairing for enkolpia.

Enkolpia were possessed by those of all socioeconomic and religious statuses. The nature of enkolpia is personal. They were perceived as an extension of the self and a way to protect the wearer in life and death. Enkolpia were also diverse in their material and craft. For our pendant, the lack of precision in the execution of the design and the bronze material, which has lost its luster due to oxidation, suggests a lower-class owner. The wealthy and high-status individuals often possessed more elaborate enkolpia made from more precious materials such as gold and silver.