From Herbert Agar’s book, Land of the Free, this print presents a view into the agrarian lifestyle of American farmers in the early-1900s. During this time, Americans were dealing with the aftermath of World War I and during the Great Depression. In order to combat the economic crisis at the time, President Roosevelt authorized the New Deal, a series of programs enacted between 1933 and 1938. As part of this deal, the Public Works of Art Project (PWAP) was created to employ artists and promote nationalism among classes. Artists were hired to incorporate aspects of the “American scene” into their works. These were featured in various locations, including the White House and House of Representatives.

This print showcases the agricultural struggle of the time. Full economic recovery relied upon the recovery of agriculture, but raising farm prices only meant higher food prices and a lower appeal to farming. Additionally, farmers faced a continual cycle of debt brought upon by the need to obtain modern farming machinery in order to mass produce crops for the increasing population. Still, some farmers were less affected by the consequences of war and modernity and continued to live simple lives. Contrasting his other works showcasing cityscapes, industrialism, and architecture, Agar’s print displays a rural landscape with no substantial modernization.

Much like the other prints in the book, the monochromatic color evokes a nostalgic feeling through the scene. Various farmers are depicted working the land in hand-spun clothing and with rudimentary tools. The background depicts an uneven, rough terrain with farm houses blending into the hills. Although man has the upper hand over nature, they are seen working together in unison to provide for one another. Contrasting, their city counterparts, the farmers do not show the need for more industrialization. Farming was a proud occupation, showcasing people’s love for the land with this simple form of patriotism.

Similar to that on Agar’s city print, a haunting feeling lingers due to the lack of expression in the piece. The simplistic design and absence of details makes the print less about this one particular farm and more about the unification between farmers to preserve the symbolic American pastoral landscape. Additionally, the farmers seem too occupied with their work; unnerved and unaware of the forthcoming industrialization bound to seep its way into the countryside. Their minimally disrupted landscape about to torn apart.

Postcard of illustration from Herbert Agar's thirty-two paged book "Land of the Free." This book was published by Houghton Mifflin Co. The original painting is owned by the United States Government. Farmers work the land in a hilly, almost surrealist distortion of typical American scenery.

Description under the illustration reads, "PWA artists interpret the American scene. Through the courtesy of the Public Works of Art Project, the above painting, owned by the United States Government, is reproduced from among the thirty-two pages of illustratons for 'Land of the Free' by Herbet Agar. (Houghton Mifflin Co.)". 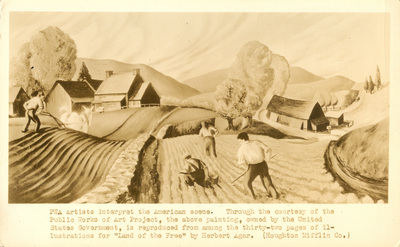