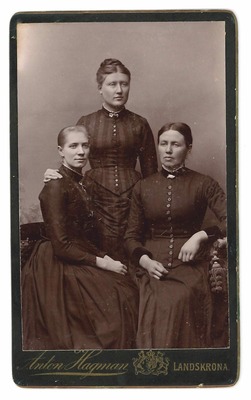 This small object is a photograph of three women from 1900 taken by Anton Hagman of Landskrona, a fairly unknown Swedish photographer who took studio portraits as well as portraits of his own family in their home. The date of this photograph makes it an early example of photography. In these early days of photography, before portable cameras and rapidly exposable film, studio portraits were quite popular, as evidenced by the success of photographers like Nadar. While photography was becoming quite popular, it was still a medium that was largely only available to the middle and upper classes, an indicator to us that this particular photograph is of three fairly wealthy women. The three women in this photograph are dressed in sleek black outfits whose tight-fitting silhouette shape and emphasis on the hourglass figure shows the women in the highest fashion for their time, another indicator of class within the photo. Merely by these two facts, we are able to place the women in terms of social class, giving us the slightest sense of who these unknown women were. Photography was often used to indicate class during the period that this photo was taken, as families would take portraits such as these and don their best closing as a means of conveying their high status. In contrast to these high society indicators, none of the women make eye contact with the camera and they all have natural expressions on their faces, making an interesting contrast with their formal posing and attire. This pairing of formal and natural speaks to the photographer’s attempt to convey the sense that this photograph is a natural, truthful representation of these women. Ultimately, the concerns of this photograph are very in line with many of the large concerns photography was grappling with at this time – the concern of how capture the essence of people while still presenting them at their best, the concern of how to photograph individuals and convey their genuine depiction within the restrictions of the technology, and, at large, how people can be memorialized by a photograph that will long outlive them. This photograph’s qualities make it an excellent example of momento mori, or an object that reflects on mortality. This photograph seems to serve as a momento mori because of its interest in representing each woman as her idealized, yet essential self. The photograph serves as a way of allowing the women to exist on as they were in this moment long beyond their last days.

Marked on reverse with 'Anton Hagman Fotografi-Altelier, Prestgatan 5, Landskrona." After this text there is a recommendation for storage of the photograph