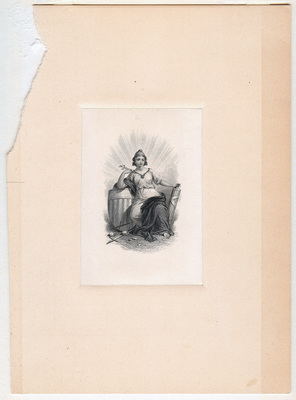 Reproduced by the U.S. Bureau of Engraving and Printing. Based on a design by Tyroler József, Hungarian, 1822-1854.

Once featured on a Hungarian forint banknote, this engraving is a reproduction of one of the three female figures, symbolizing Peace (see banknote below). Isolated from its original context, the U.S. Bureau of Engraving and Printing is responsible for this reproduction. While this print may not preserve the figure’s origins, the decision to perpetuate this illustration alone speaks to timeless universal belief in peace as a something to imagine and strive for.

Designed and engraved by Tyroler József, the banknote from which the figure originates represents a brief period in Hungary’s history in which political reformer Lajos Kossuth inspired Hungary’s struggle for independence from Austria. Born in 1822, much of József’s early life is unknown until his move to Budapest in 1837. There, József learned how to design and engrave. Producing a number of illustrations for various newspapers, his most radical work was for the banknote designs he created between 1848 and 1849 in recognition of the Hungarian revolution during the time. The banknote which included this female figure was a two forint note, featuring Kossuth’s signature who was at the time the governor-president of Hungary.

Political reformer and journalist Lajos Kossuth rose through the ranks of power in Hungary during the 1840s, believing the country’s liberty was contingent on its independence. Ultimately rising to the position of Minister of Finance, one of his major orders of business was to re-establish a separate coinage in an effort to create an independent national identity for Hungary, which he called “Kossuth notes.”

Leaning against a shield, the woman steadies herself to her left by placing her hand on a fasces. Echoing ancient Roman tradition, the fasces represents official authority, characterized by an ax head projecting from a bundle of wood tied together by a strap. The ax, however, is not present in this depiction of Peace, which may be influenced by the Roman custom to remove the ax when within the city’s bounds, signifying the citizen’s right to appeal a governmental ruling.

Swords lying at her feet, Peace is illustrated here as both authoritative and accessible, clutching an olive branch as a direct symbol of Peace for the country of Hungary. Seamlessly reproduced, this small, intricate engraving offers a simple depiction of peace mythologized. By using traditional black ink in which to describe this figure, József was able to articulate the different textures and materials of her dress, shield, and weapons.

After the revolution failed and Kossuth went into exile, the Austrian government demanded these notes be collected and destroyed. Few survived, however, allowing József’s interpretation of peace to be reproduced in print form for a wider audience.