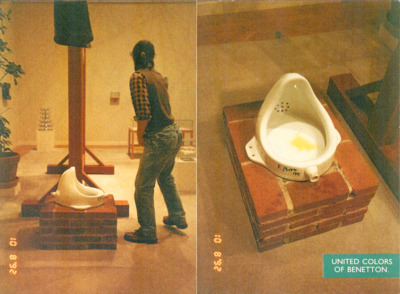 The action work “An Appreciation” photographed in the Moderna Museet, Stockholm in October 1992. This work was the first time Wu Shanzhuan collaborated with Inga Svala Thorsdottir, and later exhibited as part of the project, titled “Bird before peace,” in the exhibition FONTANELLE in Potsdam, Germany, in 1993. In the action, Wu pissed into one of the urinals signed by Dunchamp that was on display in the Moderna Museet, Stockholm, Sweden. The concept of Wu and Thorsdottir is that “the true ‘appreciation’ of a thing is precisely the use of this thing”. From the artists’ perspective, “Dunchamp insulted the urinal by forbidding its use”. Thus, Wu shows the “ritual value” of a urinal by objecting the defunctionalization of it in the exhibition space (“The Right (of Human and Things) to Become Extraordinary,” available at: http://www.randian-online.com/np_feature/the-right-of-humans-and-things-to-become-extra-ordinary/). See the link below for the back of this postcard. (Yifan Shang ‘25)