The Distortion of Eroticism 色情误 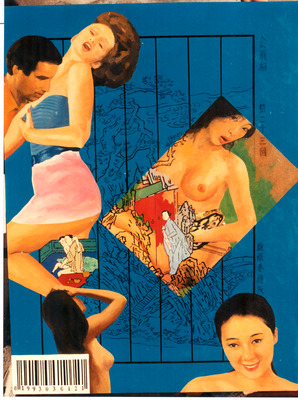 “The Distortion of Eroticism” (色情误) is an oil-on-canvas series created by Wei Guangqing. In the background, there is depiction of one couple having sex, which is derived from the Ming dynasty novel “The Golden Lotus” (金瓶梅) and is rendered in black thin strokes. Black straight lines are applied to all six paintings of this series to separate the illustration of “The Golden Lotus” into equal-spaced rectangular frames. In the painting, Wei utilized pop art to increase humor and ridicule without losing a sense of rigor (Lu, p153). The painter superposes some nude and revealingly-dressed women with the modern illustration of "The Golden Lotus" to compose the image. In each piece of Wei’s work, a bar code is depicted in the painting, which “lays an imprint for the commercialization and professionalization of eroticism in the 1990s” (Peng). According to Peng De, the erogenous figures come from the “erotic covers of the pirated publications”. In China, the underground magazine is the roof of secular culture, especially in the 1990s. “The Distortion of Eroticism” is a personal self-indulgence and self-reflection of a taboo, “not a realistic attitude of the sociality or government’s hold on pornography”, and it provides a way to think about the history of eroticism or the historical opinions of eroticism. See attached links for more paintings in this series and the back of these photographs. (Note: “色情误--第51回” and “色情误--第61回” are created in 1995 and their dimensions are 150cm × 120cm) (Lu Peng, 90s Art China, Hunan Fine Arts Publishing House, p153; see also Peng De, “Notes of ‘The distortion of Eroticism’”, Apr. 1993, ShanghART 香格纳画廊) (Yifan Shang ‘25)