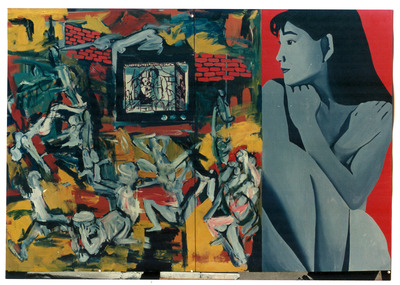 This work created by Wei can be divided into two parts. On the right side of the painting, there is a naked Chinese woman depicted in black and white. Painted in a red background, the young woman looks towards the left part of the painting. On the left side, a black vintage television is painted at the level which the woman can see, and the screen displays one ancient Chinese couple making out on the bed, which is likely a scene derived from “The Golden Lotus” (金瓶梅). Furthermore, some abstract human bodies surrounding the television are painted in white and are rendered in several postures of sexual intercourse. In the background, there is a mix of red, green, yellow, orange and black colors, and a red wall motif is painted at the back of the television. See the attached link for the back of this photograph. (Yifan Shang ‘25)