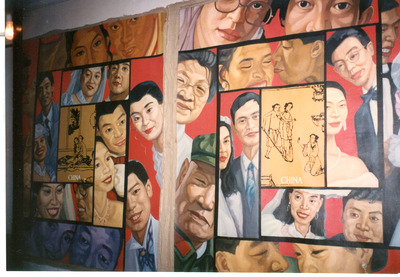 This work created by Wei was not given a title, and is combined with two oil paintings. In each of the painting, one small scene from the Ming Dynasty novel “The Golden Lotus (金瓶梅)” is depicted in the middle, and they are rendered by black thin strokes in a muddy yellow background. The left painting depicts a Chinese couple making out, and the right one depicts the scene of one woman kneeling down in front of a couple, of whom the man looks furious and is holding a long stick, seeming to beat at the kneeling woman. Plus, the word “CHINA” is written in white and is labeled at the bottom center of these two paintings in the center. Surrounding the small scene from “The Golden Lotus'', there are paintings of contemporary Chinese newlyweds that are framed in rectangular boxes. These paintings are separated by straight black lines, and are arranged in horizontal and vertical layouts around the center painting. Hence, these paintings are rendered in a red background. (Yifan Shang ‘25)