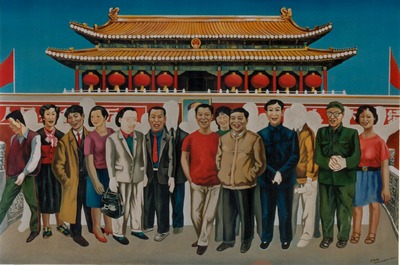 This painting casts a frontal view to the Tian'anmen in Beijing. Before the building, numerous figures array naturally to take a portrait in front of the monumental building. Behind the figures, a few grey silhouettes are rendered, perhaps indicating more people are crowded before the setting. Depicting people joyously taking portraits before a politically charged monument, the artist might sarcastically critiquing the bind between politics and civil life. The image thus serves as a political portrait; however, a familial thread is also contained in the thread: Mao Zedong, whose oil portrait looms behind the figures, joins this group portrait almost as a "patriarch", leading its children (citizens) to build a new republic of China. (Zhou, A History of Contemporary Chinese Art: 1949 to Present , 2020, 32-33; see also Huang, 王劲松（Wang Jinsong）, artda, available on https://www.artda.cn/yishujiakuguonei-c-3280.html). (Jerry Wu'23).