Knock On the Door (Presidents on the Dollars) 叩门 （美元上的总统） 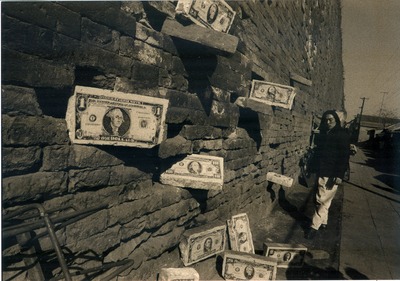 Knock On the Door 叩门

In 1992, after artist Wang graduated from the Zhejiang Art Academy (today's China Academy of Art), he returned to his home city Beijing. Under a happenstance, Wang received some abandoned bricks from the walls of the Forbidden City due to renovations. These bricks generally preserved their cuboid shape, though with irregularities from wears. On the surface of the bricks, Wang employed dark pigments, as well as his well-trained, meticulous artistic skills, to paint several versions of US dollars banknotes. The sags and crests on the bricks render a great parody to a dated, used bill. Depicts banknotes of the United States on bricks from a traditional Chinese architecture, Wang might wish to highlight the increasing international merging and globalization at the end of the 20th century, particularly on an economic level. Other ideologies extended from economy might also be alluded in the work. After naming the work "Knock On the Door", Wang later on added a subtitle "Presidents on the Dollars" to the work -- an act that might replaced the political tokens in the work with the genre of Portraiture. (UCCA Center for Contemporary Art, 王晋《叩门——美元上的总统》, available on https://ucca.org.cn/exhibition/society-guidance-part-1/audios/) (Jerry Wu'23).