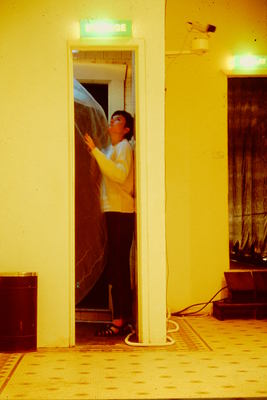 This work seems to be arranged in a very narrow space, much like a shortened corridor, or extended closet. The end of the space is rounded (at least in one of the work's settings); imagine the shape of apse in a conventional western Medieval church. Enclosing the space are a few sheets of utterly black, slightly reflective black films. The films not only obstruct lights from outside, but they also mute participants' vision to their environments as they step into the room. As observed in the photographs, some of the rooms are installed with speakers and televisions, perhaps are playing some designated programs. In one of the setting, we see a participant is standing against the wall, a tremendous, fully inflated, plastic ball pressing against his belly. A sense of suffocation suddenly infuses the scene. Claustrophobia is an idea permeates almost all of the settings, and is particularly accented by the "ball vs. man" one. Perhaps this work is a probe of the intimate relations of human minds and space. (Jerry Wu'23).