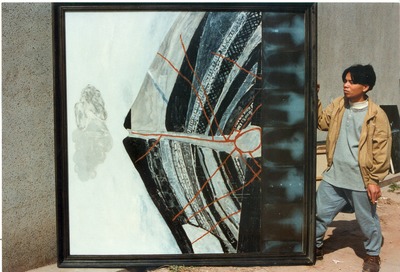 Upon a background composed with x-ray films of upper human body -- including lungs -- Shang placed an art composite made by acrylic and oil painting (with both works in this entry). The composite paintings render an image of a sectioned volcano. In the first work of the series (No. 1), the volcano seems active and is erupting magmas denoted with red "lines". What structured the volcanos in the works are a little bit hard to identify. But what we know is the little constituencies of the burning mountains are complementary to each other -- they fill out each other's blanks to give the volcanos' triangular form. "94 Great Landscape" might be a series that speaks to the world of Post-Modernity, where variant components of the world learn to live in a harmonic symbiosis, just like the parts of the volcanos do in the paintings. The looming images of human body x-rays, with a focus on the lungs part, might also be Shang's warning of the potential threats of the Post-Modern reality, the spiritual suffocations and muting that might play as a result. (Yu, “大风景”：尚扬的艺术世界, 2008, from 《文艺研究》, available on http://www.artnow.com.cn/CommonPage/ArticleInfo.aspx?ChannelID=274&ArticleID=15015) (Jerry Wu'23).