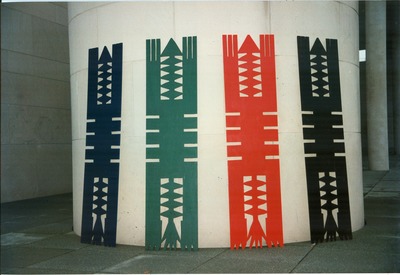 "The main focus of his (Ren Rong) artwork is the figure of the plant people, which the artist has developed over the past years and which he presents in different variations within different contexts. The Plant People are a combination of hermaphroditic, floral and human forms. At times they appear to be overtly erotic, having many bosoms and arms, and at other times quite un-erotic and non-sexual. The plant motives and body parts appear to be floating which gives the viewer an impression of motion. Ren Rong portrays the character of the plant person as an image of great vitality. He achieved this by initially using the traditional Chinese technique of paper cutting, which has been used for centuries as a motive, which expresses power and enjoyment of life in the art of Chinese folklore." (Hiekisch-Picard, from "Catalogue: Ren Rong", 2000, publisher - PUBLISHEREslite Corporation, 誠品股份有限公司 (Taipei, Taiwan), available on https://aaa.org.hk/tc/collections/search/library/ren-rong) (The additionally attached imageS can only be presumed to belong to the "Plant People" series; labels/captions of the works are absent).(Jerry Wu'23).