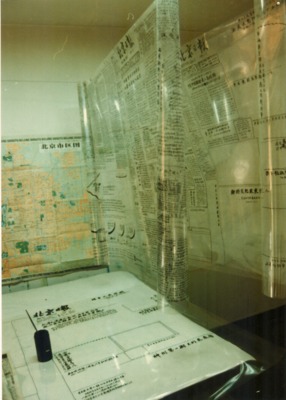 "Plate-Making Studio (1995-1996) takes the practice of calligraphy to a more public domain by copying in long-hand the entire edition of the Beijing Daily onto a transparent sheet. The copying is made in the artist's own calligraphic style, and repeated for each day's newspaper for a hundred days. When the sheets are displayed in a row, all legible texts are cancelled out by the palimpsest [sic] of writing. The act of copying a newspaper appropriates symbolically a mass language for self expression, with its narrative content obliterated in the layering. But the artistic self so painstakingly [sic] established is still never securely Qiu's own except when he is actively writing, because the uniqueness of his calligraphic touch can still be dissipated by being turned into a paradigm for others. His writing may be made a model style to be copied or, as the transparent sheets suggest, his copies can be used as the plates for mass printing. A personal voice can still be made impersonal by becoming the standard voice of the public." (Chang, Qiu Zhi Jie: Artist as the Writing Hand, available on Zhou Document) (Jerry Wu'23).