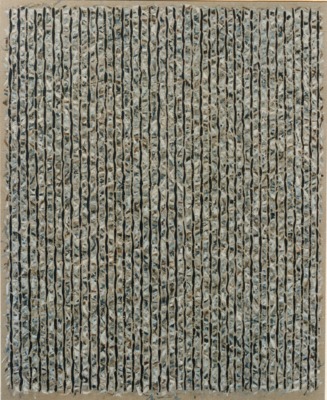 The major compositions of the painting are the parallel, encompassing lines painted vertically in black. Though the material of the paints is acrylic, the brushstrokes were applied on the linen as if ink on paper practiced in conventional Chinese calligraphy. Indeed, Qin has confessed that his "Line Field" series has greatly inspired by calligraphy of Chinese. Among the constitutive black lines -- among their fissures -- other colors are applied to give the background a colorful diversity (yet not too much!). Seldom of the colors in background are highly saturated; some identifiable ones are ocher, mauve, and light grey. "Line Field" series at its initial stage to the artist was an experiment and exploration on the relationships between point, line, surface (2D), and eventually, spacial units (3D). Later on the artist was interest to explore the intersecting spaces (line over line, for example), the alternating representations of the "real" and the "virtual" (perhaps by factures), and what an art writer termed "formal aestheticism". (He, 「線．場」秦一峰個展, 2016, 欣传媒 Xin Media, available on https://www.xinmedia.com/article/77051) (Jerry Wu'23).