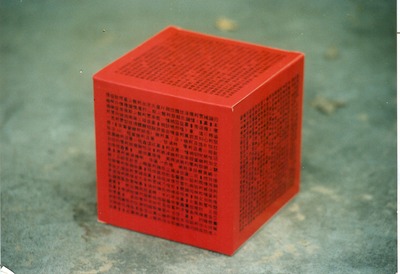 This artwork involves two different procedures of making: one through digital editing on computer and then the edited texts are printed out on a red paper cube. Ni Weihua first randomly selected a piece of text from journal or newspaper. Upon transcribing the texts onto a PC computer, the artist used document editing program to misalign the texts by half angle （半角字迹的错位）. The resulting text of the misalignment was a series of illogical and illegible Chinese characters, and symbols (Roman and others). In the following stage, Ni printed the texts out onto a red paper cube (similar to a dice) in black inks. The finished artworkS (there were duplicates) were installed in various venues by the artist; and he also disseminated them to random publics. With just one simple misalignment on the text, the meanings and readability of it undergone significant changes. "Continuous Spreading Event" is Ni's reminder of the "butterfly effect" in social structuring -- one slight shift in a social module could have incalculable consequences on large social bodies. Happenings in the so-understood human "progress" could evolve into human "paralysis". (Ni, 连续扩散事态, Ni Weihua's official website, available on http://www.niweihua.com/index.php/list/cnsprea); see also (Wang, 现场 | ​时隔30年 倪卫华“红盒”作品再现天物空间, March 2021, YaChang Art, available on https://news.artron.net/20210308/n1092421.html) (Jerry Wu'23).