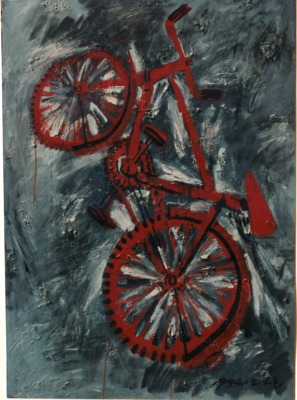 The majority of the canvas is occupied by a bicycle painted in red. The bicycle forms the picture's diagonal, extending from the bottom-right end to the top-left corner. Beside several key components of the bike are outlined in black, the rest of its body is painted in scarlet-to-maroon red. The bicycle's spokes (the thin metal rods connecting the tires' rim and hub) are painted indistinctly: some parts of the spokes are visible while others are not; as if Mao wished to capture the bike in rolling motion, rather than a parked stasis. At the bicycle's back, the artist used white, grey, and black colors to construct a chaotic, illegible, nebulous, and arguably, abstract background. Bicycle being as one of the most common means of transportation in the 90s' China, Mao's choice of subject announces him as a contemporary artist, attending closely to the social changes and streams. The moving bicycle absent of any passenger may convey Mao's sense of loneliness, especially within the contemporaneous art circle. (Han, 毛旭辉 1976-2007, published by Han Ya Xuan （汉雅轩）, 2007, p.206); see also (Mao, 道路 毛旭辉的绘画历程 1973-2007, Shanghai People's Fine Arts Publisher 上海人民美术出版社, 2008, p.237). (Jerry Wu'23).