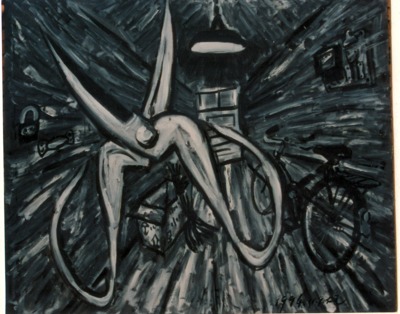 At the center of the picture, a pair of large, opened, potentially metal (with its reflective surface) scissors dominates almost the entire left composition. Loom behind the giant scissors are a few quotidian objects -- which have frequented many of Mao's works during the time period -- bicycle, lamp, lock, box, etc. At the furtherest background, an economically painted door stands aloof; its surroundings are made obscure by the artist's crude, totalizing strokes of brush. The far reached door functions as the whole image's vanishing point -- excluding perhaps the giant scissors (the scissors is more like a stamped appendage rather than a part of the setting) -- pulling everything else towards it by the gravity of linear perspective. The colors used to complete the work are limited and united: mainly only with a trio of white, grey, and black. (Jerry Wu'23).