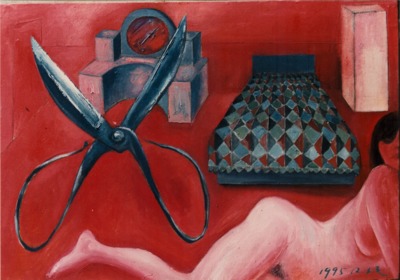 This image is set in a boudoir rendered in red. At the room's left, a dresser designed in rigorous geometric volumes stands aloof; next to the dresser is a twin bed with checkered quilt covering its surface; at the room's -- as well as the picture's -- right margin, a white, or grey wardrobe (the red filter perpetuates the picture plane obscures the actual color of the closet) attaches to the corner. In the foreground, a naked female is captured in a reclining poise, confronting the audience frontally. Adjacent to the female figure, in the picture's middle ground, a pair of giant scissors is inserted. The scissors' tilted scale and lack of perspective deserts itself from its setting, making it an other-worldly addition much in the fashion of collage. The implications of the inserted scissors remains unclear. Associating the boudoir background, the scissors might be Mao's earnest expression of the "feminine sewing nature and female artistic creativity" (translated from original text in Chinese). (Zhu, 剪刃-毛旭辉2005年个展 -- 毛旭辉的剪刀情结, May 10, 2005, available on http://www.tcgnordica.com/2005/cutting-edge/) (Jerry Wu'23).