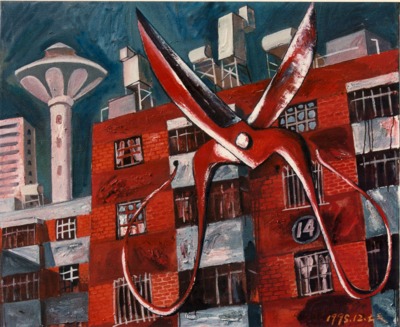 In the background, an apartment with scarlet walls (the redness on wall's surfaces may be a result of the ongoing sunset, as the title tells) emerges from a dark blue sky. On the building's left, a water tower stands slightly behind; standing together is another tall building in right or grey displayed on the work's left margin. In front of the apartment painted, a disproportionately huge scissors suspends in the mid-air, remaining opened, as if is ready to cut through something. The surface of the scissors echos the similar redness caressing the building -- perhaps it is, as the building does, reflecting the sanguine sun rays radiated by the ongoing sunset. The connection between the giant, floating scissors and its background is obscure. The scissors may play a vehicle for Mao's feelings transpired in real life (symbolism played by his apartment); may the emotions be confusion, fury, and melancholia triggered by the swift social changes occurred in the late 90s' China. (Zhu, 剪刃-毛旭辉2005年个展 -- 毛旭辉的剪刀情结, May 10, 2005, available on http://www.tcgnordica.com/2005/cutting-edge/) (Jerry Wu'23).