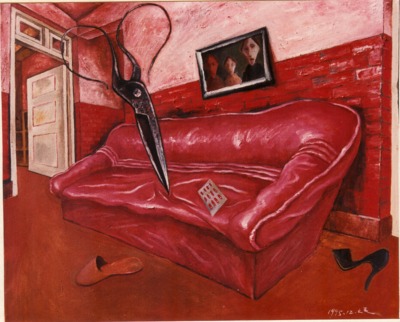 This artwork captures a domestic space -- a living room, perhaps -- in an unrealistically visceral-red. We are shown with several realistic objects in the room: a door opens by the farthest corner of the room in the image; within the room, against a wall, a long, reflective sofa stands, with a plate of pills sits on its surface; above the sofa, a portrait of three figures hangs on the wall; and finally, two separate shoes -- a slipper and a high-hell -- are scattered on the floor near the sofa. On the sofa's cushion, a disproportionately large, almost whimsical, scissors erects. The scissor's contact with the sofa is highlighted by the few converging folds on the sofa around where the scissor's head points to the cushion. We are not sure of the connection of the scissors with the background, but it may serve as a vehicle to express Mao's tangled emotions. In 1993 to 1994, about a year before the work was made, Mao was diagnosed with issues in his digestive system, much due to his abuse on alcohols. After since, artist Mao relied on medications to relieve his symptoms. The plate of pills we observe on the sofa might be one among the many medicines Mao took. And the scissors conjured near by might be a silent messenger to voice Mao's intertwined feelings to his tormenting disease. (合美术馆 He Art Museum, 毛旭辉作品《剪刀系列》：我与剪刀的相遇，是因为它就在我的桌子上, 2016, available on https://www.sohu.com/a/276011744_650774); see also (Zhu, 剪刃-毛旭辉2005年个展 -- 毛旭辉的剪刀情结, May 10, 2005, available on http://www.tcgnordica.com/2005/cutting-edge/) (Jerry Wu'23).