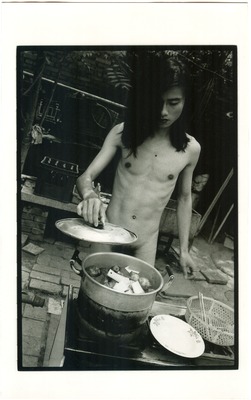 This artwork was Ma's second attempt to perform his thematic art series "Fen·Ma Liuming's Lunch". In the work, the naked artist prepared several cookers like pot, chopsticks, dishes, and gas stove in an outdoor setting. Ma then put some already cooked potatoes into the pot prepared, along with some paper scraps with potato pattern drawn, the pen he used for the drawing, and some tree leaves he obtained nearby. After collecting all the "materials" into the pot, Ma ignited the stove and waited for the "meal" to ready. When the "meal" was well cooked, however, Ma chose to bury the edible potatoes under a tree near by, and to serve other objects in the pot into a dish. The absurd performance of Ma might play a wistful symbolism of the self-nullifying nature of human acts, that many conventions and conducts human earnestly abides could carry little significance. (Jin，Art of Ma Liuming 马六明的艺术，2016，Meishu Wenxian 美术文献, issue 10, ISSN:1673-4858); see also (学古斋画廊, 【学古斋新闻】代理艺术家马六明作品被英国泰特美术馆收藏, 2015, available on http://www.cxphome.cn/xiaoshougushi/n35768883.htm). (Jerry Wu'23).