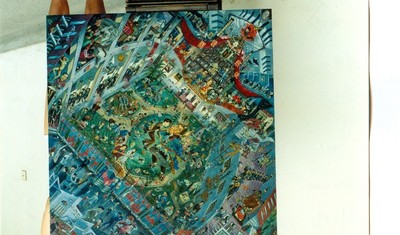 While "The Academy" is the comprehensible English translation of the work's title, the literal translation should be "the Courting of Learning" (from “学堂”). The notion of "court" to LIU Dahong denotes belief and authority. For example, "church" in literal translation in Chinese is "the court of doctrine" (教堂). The "court" in the etymology of ”教堂（church)" signals the authoritative and epistemic power it holds. LIU Dahong wishes to ask the audiences to think about the "court", its authority, and particularly the potential problems behind the very epistemic power. (Beside "the Court of Learning", the artist also painted "The Court of Military (in the fiction Shuihu) （忠义堂）", and "The Court of Doctrine (The Church)（教堂)".) The work depicts (presumably) the interior of an academy from a certain heights -- it gives a bird-eye view to its subject. The academy shows to the audience of its entrance, the atrium, and several buildings embracing the atrium. Inside of the academy, numerous figures -- the central two in the painting's composition, for example -- do not accord with the proportion set by other figures and the architectures. The composition of the work in totality is very crowded; spaces on this canvas are charged with details and patterns. (YaChang Art, 一个真实的“堂”世界：刘大鸿访谈, May 10, 2005, available on https://news.artron.net/20201222/n44837.html) (Jerry Wu'23).