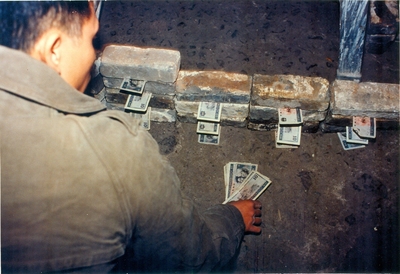 In this action art, LIN YiLin prepared 100 blocks of bricks, 100 bills of 10 Yuan (CNY) currency, a boxer glove, and a ladder. Outside of the "Red Ant Bar" in Guangzhou, China in 1993, the artist stacked the bricks in sequence, with a 10 Yuan bill sandwiched between each brick in a vertical stack. After completing the heaping, LIN YiLin then withdrew the bills between the bricks, which at times caused a collapse of the established structure. The artist then veered to hit the stacked bricks with other bricks, until they smashed each other into debris. While Lin piled the debris to the side of the structure, he simultaneously threw the bills to the audience. The views' reception to the bills were varied: some were eagerly collecting the bills, while others shied away with confusion and fear. "100 Blocks and 1000 Yuan" was Lin's first attempt in his artistic career to establish relations between the audience and the art materials. (YaChang Art, 没空间，大尾象是这样做展览的, March 18, 2017, available on http://former.cfbond.com//ysp/ddys/201703/t20170318_5212126.html) (Jerry Wu'23).