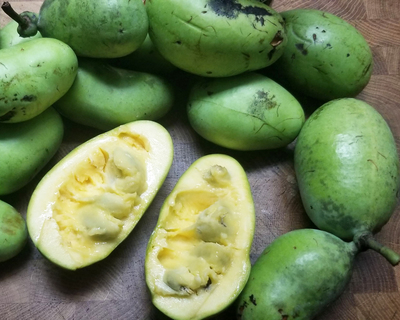 This tree is found naturally throughout America east of the Mississippi. It can grow from Florida to Ohio and Michigan. The tree produces a green fruit that looks a bit like a plum or pear, which develops dark brown spots and bruises easily as it ripens. Ripe fruit drops from the tree with a gentle shake. The interior flesh is golden, with large brown seeds. The taste has been described as a combination of pineapples, mangos, and bananas. The fruit can grow up to about 6” in length and 2” inches in width; it is the largest native fruit in North America. Modern scientists believe that it co-evolved into its current form alongside now extinct megafauna.

Seeds must be kept moist and cold-stratified in order to germinate. The simplest way to accomplish this within the native habitat range is to put the seeds in a pot of soil outside when the fruit ripens in the fall. A layer of leaves or grass on top will help retain moisture over the winter.

Seeds donated by Dark Earth Farm from trees that were growing on their Granville property when it was purchased in 2018.

The plant was heavily used by Indigenous peoples east of the Mississippi prior to contact with Europeans. It is believed the tree has a wide native range due to Indigenous peoples actively planting and spreading the seeds. It was particularly culturally important for Appalachian and Ohio Valley groups like the Shawnee, Miami, and Haudenoshonee.

In Knox County, Ohio the Shawnee people had a month named after the plant; September, known as the Pawpaw moon, signifies the start of a new year.

The plant also has a long tradition within Anglo-European cultures in the modern United States. For example, the plant was mentioned by John Smith while writing about the founding of Jamestown. The fruit was a favorite of George Washington who personally planted the tree at his Mt. Vernon estate. Lewis and Clarke both escaped starvation by eating the plant and suffered from nausea due to over consumption of the fruit.

Pawpaws have become a folk symbol of Appalachia; it even has the song "Way Down Yonder In The Pawpaw Patch". Towns in West Virginia and Michigan have also been named after it. The fruit also represents freedom within American culture, since it was frequently eaten by runaway slaves on the way to freedom.

Today the fruit is the state fruit of Ohio and every year Ohioans can try out various forms of the fruit at the state Pawpaw festival in Athens Ohio.

This work is licensed under a Creative Commons Attribution 4.0 International License.