Welcome to the Spring 2017 issue of Peregrinations: Journal of Medieval Art & Architecture. This issue is devoted to a series of interdisciplinary articles focused on popular imagery in the form of graffiti and badges, both sacred and secular. Edited by Matthew Champion and Becky Williams, are six articles that explore the flourishing scholarship on medieval and later graffiti (and other building marks) assisted by ever-expanding examples made available on photographic databases. Most buildings have been found to contain some markings and sometimes many layers of markings, appearing in the most unexpected places, over centuries.

After a thoughtful introduction explaining the new field of examining graffiti and building markings, Matthew Champion explores the radical shift in perceptions towards historic graffiti. This is followed by Becky Williams an examination of the bewildering variety of graffiti found at one site: All Saints Church, Leighton Buzzard and what each might mean within its physical context. Graffiti found in the jail at Winchester’s Westgate is the subject of Claire Woodhead’s study as to its multiple roles in what must have been a place of combined misery and hope. Alison Fearn’s article, then investigates hitherto-overlooked deliberate taper burn marks at Donington le Heath Manor House and how their production and placement was meant to keep the home’s occupants safe. Natalie Cohen’s essay describes how graffiti is displayed and interpreted at a wide range of National Trust sites in Kent and East Sussex: each building brings forward new questions for scholars and visitors. Perhaps most surprising is the discovery analyzed by Crystal Hollis of graffiti marks on the St. Joan of Arc Chapel, once in France and now in Milwaukee and what its medieval and more modern inscribers wished to communicate. Becky Williams, then, sums up recent scholarship on graffiti and suggests new directions in which researchers could inquire. Linking with this excellent group of articles is the article by Ben Reiss who proposes a new interpretation of sexual body-part badges in late medieval Europe which, like the graffiti crosses boundaries of sacred and secular as well as rich and poor.

New layout/New format. In hopes of coming (finally) into the 21st century, Peregrinations: Journal of Medieval Art & Architecture is trying out a new format under Digital Commons. This means that accessing the journal should be cleaner and easier and that previous issues are now professionally archived for the future. It also offers features such as online submissions and email notices and more. We welcome any suggestions/compliments/criticisms you have regarding this change.

The Priest, the Prostitute, and the Slander on the Walls: Shifting Perceptions Towards Historic Graffiti
Matthew Champion

Monsters, Masons, and Markers: An overview of the graffiti at All Saints Church, Leighton Buzzard
Becky Williams

Conclusions Regarding the Study of Medieval Graffiti
Becky Williams

Discoveries: Rebuilding or Restoring the North Tower of St. Denis 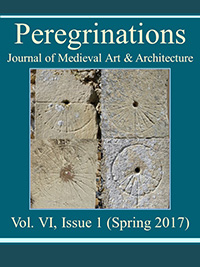