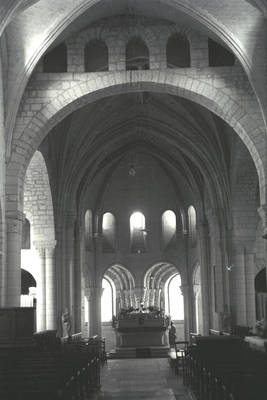 Nave interior looking east towards the apse. Note Gothic vaults. The very narrow ambulatory was designed to strengthen the weakened choir area. This Benedictine Abbey was founded in the ninth century by Charles the Bald. In the mid-11th century, a Romanesque church was built (repaired in 1125) and re-worked again in the Gothic style in the 14th century, with later additions during the 17th century, finally falling into disuse in 1745.During the 13th century, sixty nuns lived under the rule of an abbess, while later it became one of the most powerful monasteries under the Valois, with an abbot appointed by the king.