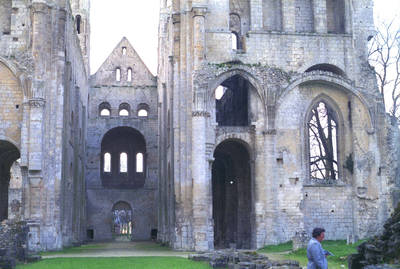 Jumieges Abbey, nave looking towards the west end, Anglo-Norman Romanesque and Gothic architecture, France. Consecrated in the presence of William the Conqueror in 1067. Once regarded as a model for monasteries, it was known for its works among the poor. The church would be enlarged in 1253 and later in 1573. It was destroyed in the French Revolution.